Part of the ATC’s collaboration on the EU Leader project, Flourishing Destinations involved hosting, alongside our partners, a delegation of visitors from Belgium and Romania on a five day tour of Angus. The visiting groups involved would be made up of individuals who were involved within their own tourism communities. Our mission was to try and show them a wide variety of initiatives in Angus that brought community together and led to sustainable tourism development.

A contingent from Basinul Dornelor in Romania were first to arrive on Tuesday the 3rd of September and enjoyed some time on a specially organised tour at V&A Dundee before going on to Ledyatt Trout Fishery. The group from Meetjesland in Belgium arrived later in the day and both groups, along with representatives from Angus, met up for a welcome evening at the Airlie Arms Hotel in Kirriemuir. The Angus hosts welcomed everyone to what would prove to be a busy few days with a packed schedule full of events, tours and workshops.

This was the second of the scheduled European learning visits, following on from an exciting journey to Romania  in April 2019. The Wednesday started with a walking tour in Kirriemuir. Our guests took in the Tayside Police Museum, the Angus Gateway to the Glens Museum, DD8 Music studio and then to sites dedicated to two of Kirriemuir’s famous sons; the statue of the former lead singer of ACDC, Bon Scott and writer of Peter Pan, JM Barrie’s Birthplace.
To make the most of the limited time we had, we split into smaller groups and appointed a guide to each group that would lead the way. Each stop gave an insight into the collaborative community spirit that is prevalent throughout the town and with a population of just 7000, Kirriemuir packs well above its weight when it comes to visitor attractions. The walk finished at the Peter Pan playground and a visit to the Camera Obscura. 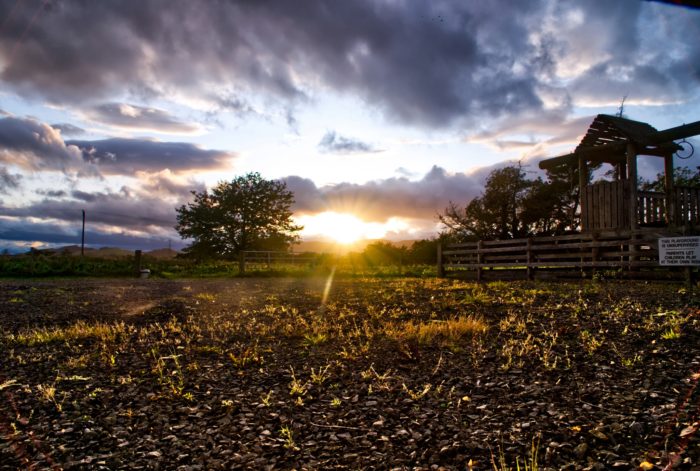 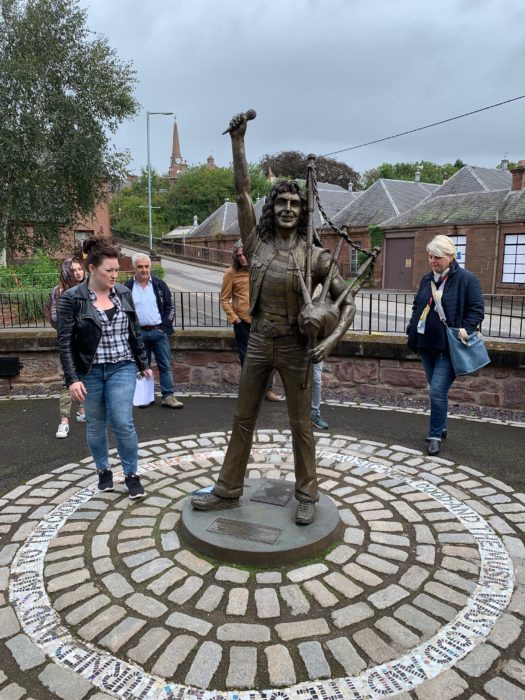 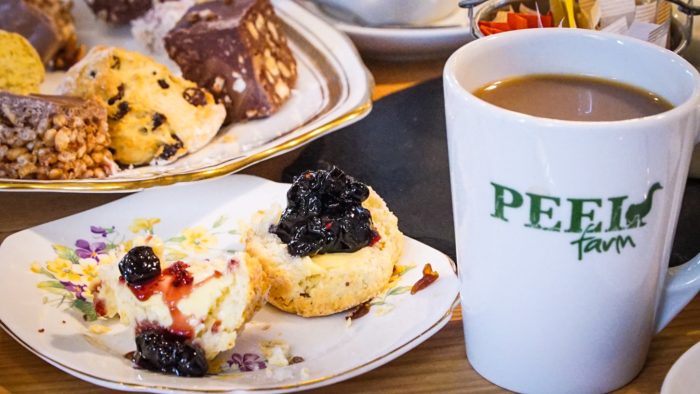 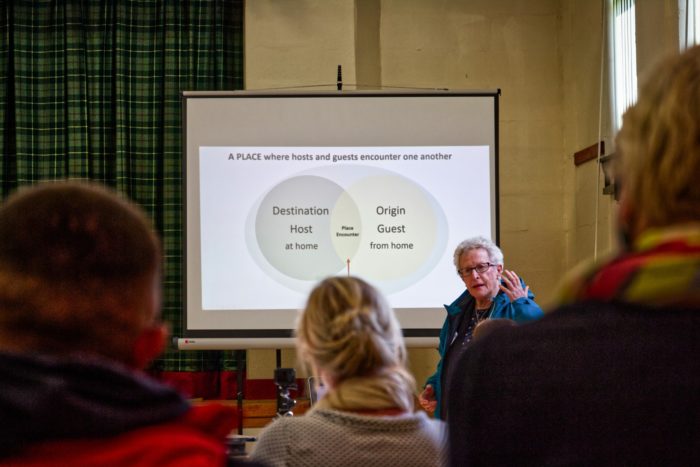 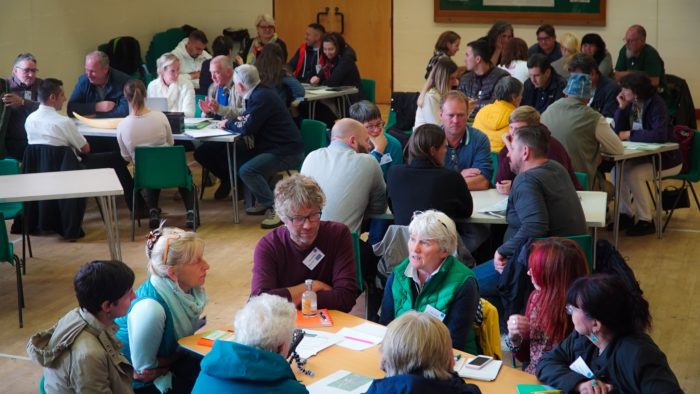 For lunch, we travelled to Peel Farm. As well as providing us with much needed sustenance, it also gave the opportunity to find out the story behind Peel Farm’s diversification journey into tourism that started 35 years ago.  Most recently they were awarded funding, through Leader, to develop this further with the creation of four luxury glamping pods with exterior hot tubs.

After lunch, is was up the glen to the Glen Isla Hall for our first workshop of the week; based on the topic of ‘Sense of Place’. We were welcomed by the Chairman of the hall, Arthur, who gave us an insight into the local history and the recent project to improve the accessibility the hall had to a reliable water supply by creating their own borehole. This has allowed the hall to be better utilised by the local residents in the glen.

It was then time to hear from our main speaker Anna Pollock, founder of Conscious Travel. Our participation in developing a flourishing visitor economy that benefits all stakeholders has been guided by Anna’s work.  Her collaboration across the three countries has kept our project focussed on making each area a flourishing destination:

Anna presented an overview of the concept and we went onto discussion on now conventional tourism considers ‘Place’ in the context of flourishing destinations. All our participants had been asked to bring along  an object that reminded them of ‘home’. Whilst expanding on the personal connections we each had with our own objects we could begin t0 recognise the influence that our sense of place had in creating who we now were as individuals.  This continued with further debate on whether ‘a place makes us’ or ‘do we make the place’.

After our workshop we heard from our next guest speaker. Clare Cooper, was one of the founding members of the Cateran Eco Museum. Dubbed a ‘museum without walls’ the Cateran Ecomuseum is an outstanding new cultural destination designed to reveal the hidden heritage of a captivating part of Perthshire and Angus by the community who live there. The Cateran Ecomuseum tells the story of its people, places and landscapes

To finish the afternoon, we took time to explore the local waterfall, Reekie Linn. This spectacular natural site and the surrounding countryside gave the visiting participants a real flavour of some of the beautiful scenery that makes Scotland such an attractive lure to tourists.

Dinner continued the celebration of the local area with a dinner that really highlighted the fantastic local produce that available at the Drovers Inn in Memus. The restaurant prides itself in offering high quality locally sourced food and drink and the diners were not disappointed. With starters such as Goats Cheese and Poached Pear with walnut salad, honey and mustard dressing and mains that included Supreme of Glenogil Pheasant with smoked ayrshire bacon, stuffed with pork sausage meat, apple & rhubarb with red cabbage, braised fennel, fondant potato & tarragon jus….our visitors were justifiably delighted with our Scottish cuisine. 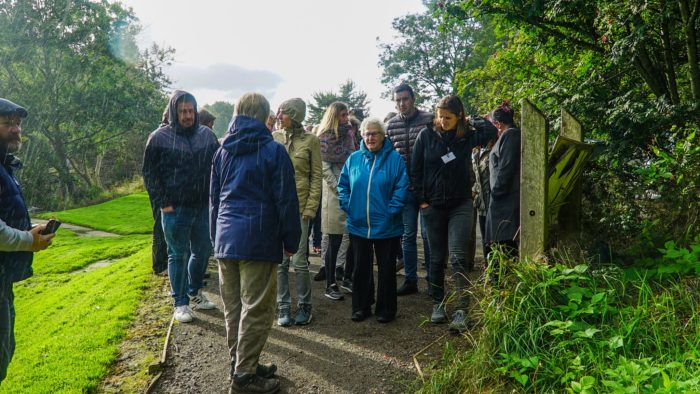 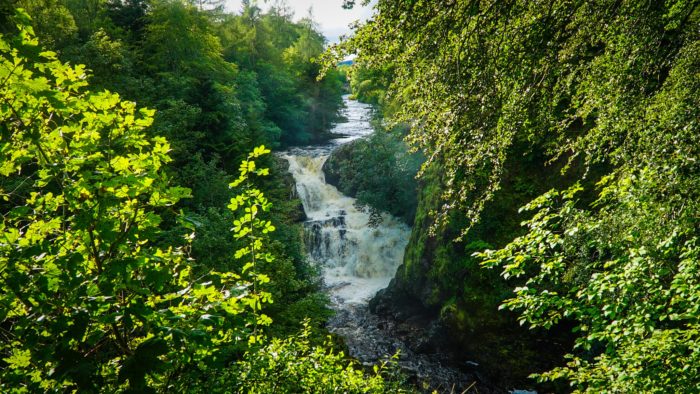 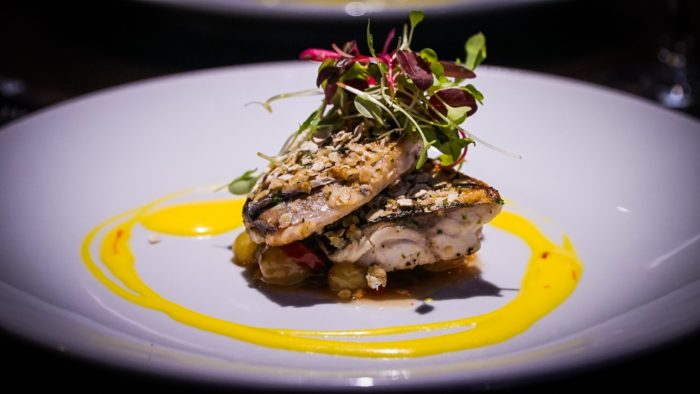 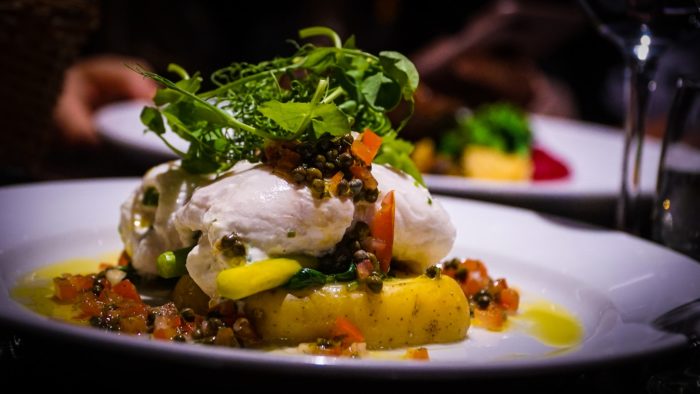 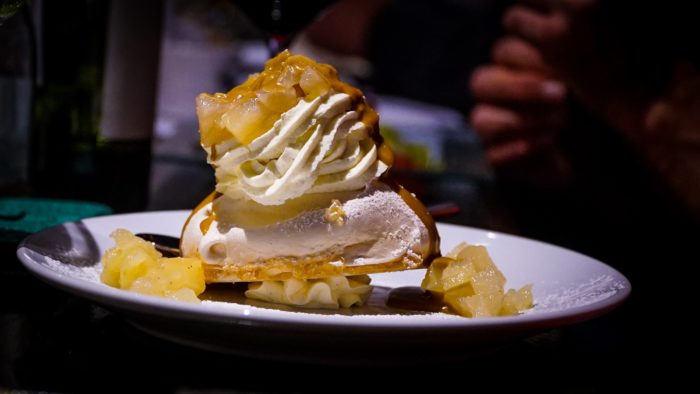 Thursday morning was spent at Murton Farm Trust and Nature Reserve, near Forfar. Prior to the visit, the participants had been asked what or who they’d like to interact with whilst in Angus; in particular a person that shared either their passion or vocation in another country. With this in mind we invited individuals from Angus to attend Murton who would provide this connection. With a relaxed agenda for the morning, participants could look to enjoy meeting new people and learning about each others’ work or businesses.
Several craftsmen and women were also on hand to display and demonstrate examples of their work; professional stone carver David McGovern of Monikie Rock Art, Julie Hermitage from Uan Wool, artist and designer Victoria Wylie, and willow weaver Rachel Bower from Woven Willow.

We moved onto the nearby town of Forfar for lunch at the venue of our second workshop,  the Royal Hotel. whilst endeavouring to highlight the breadth of culinary tastes in Angus, we introduced the group to the local delicacy of a ‘Forfar Bridie’ which was washed down with Scotland’s other national drink, Irn Bru. Our visitors were lucky enough to receive, much to their bemusement, a guest appearance from local superstar ‘Baxter the Bridie’.
The workshop was open to the public and allowed people to engage from all three regions in the conversations. Representatives from each area laid out their progress on the project so far and detailed plans they had for the future. 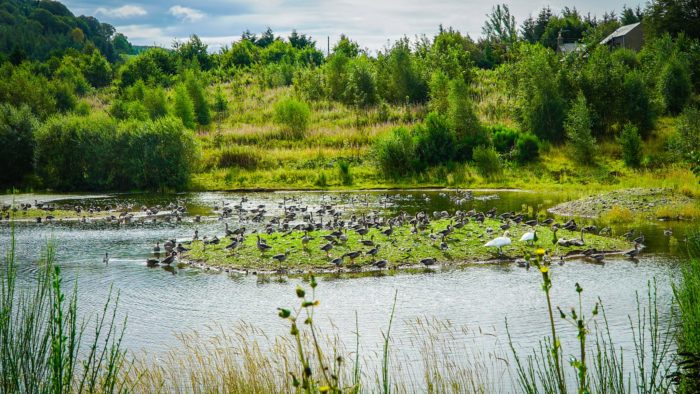 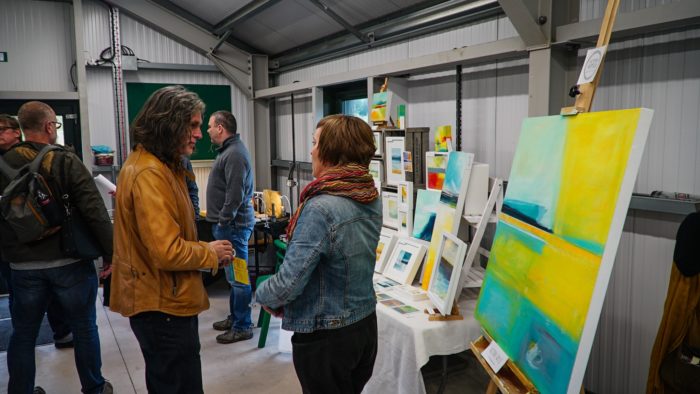 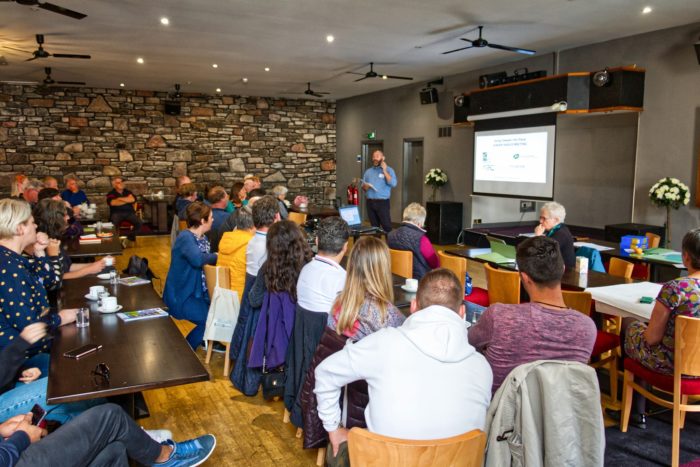 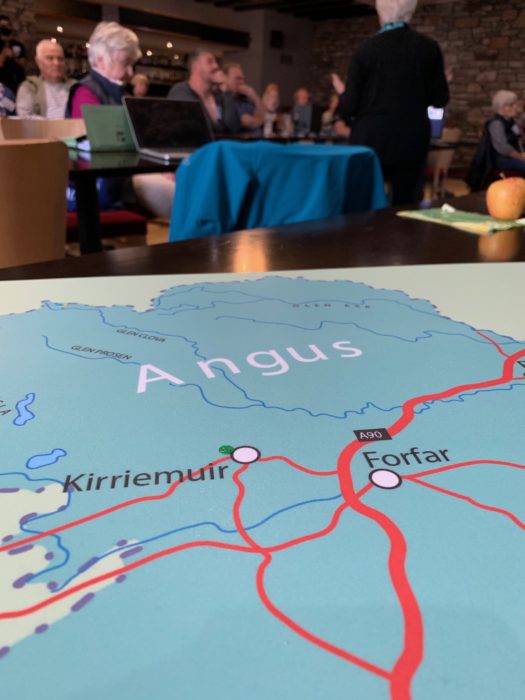 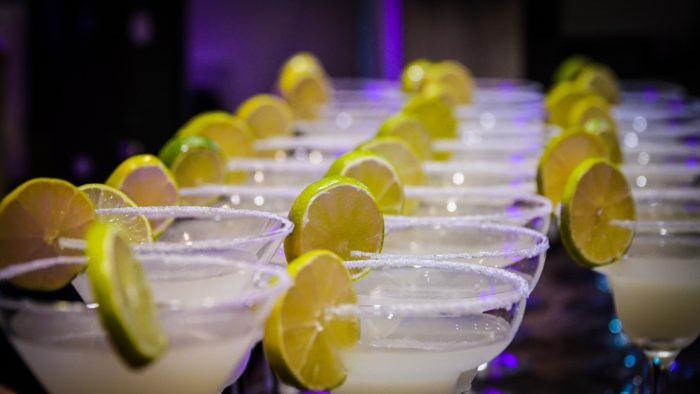 The Belgians and Romanians had enjoyed two nights in Kirriemuir at either the Airlie Arms or the Thrums Hotel, but now they would move towns up towards Montrose. Here they would stay at the Links Hotel and Park Hotel.

After checking in and a short rest we headed out for another taste of the local flavours and a great example of different cultures coming together beautifully at El Tajin Mexican restaurant. Owner Martha, who took part in the Romanian journey, was eager to bring her cooking skills to the fore and show how she had integrated the best produce that is sourced locally into her menu and fused the Mexican and Scottish flavours together to great effect to bring her customers an authentic Mexican culinary experience.

Friday morning brought a trip down the coast, taking in the fresh sea air. First stop was at the small village of East Haven. Here we learned about how a community can really come together and infuse a real ‘go ahead’ spirit that can bring about a fantastic, positive transformation to a whole village through collaboration and engagement with all aspects of the local community. The story of “Our EastHaven’ really is an inspirational one. http://www.easthavenangus.com

Next was onto Arbroath harbour for a wander round the heart of the towns fishing community with local tour guide, Neil Henderson. Neil runs a local ghost tour business called BeSpooked Tours and informed us on some of the history of one of Scotland’s traditions fishing ports.

We could also see some interesting guerrilla tourism using wool. At the ‘Fit o’ the Toon’ we saw ‘Yarn bombing’ from the community group, Woolly Workers, who gather from all over Angus and create knitted and crochet work to adorn public spaces and engender local pride.

Our next stop was to taken at the delightful setting of Hospitalfield House. Built on the site of a former hospital that was erected in 1260 to support a Benedictine abbey in Arbroath, the house went through several changes before it was bequested by Patrick Allan-Fraser to become an art school and latterly a post graduate residential property.
Before the tucked in to a delightful lunch, again using the finest, freshest and mostly home grown ingredients, we heard from Angus’ only coffee roaster, Kathryn Baker of Sacred Grounds and Goat and asparagus farmer, Gillian McEwan from Myreside Farm. Both businesses share a passion for producing high quality products whilst educating and inspiring locals to embrace the ethos of shopping locally and ethically.

Scott Byrne from Hospitalfield rounded off the talks with a short history of the venue, which was followed after lunch with a tour of the house. 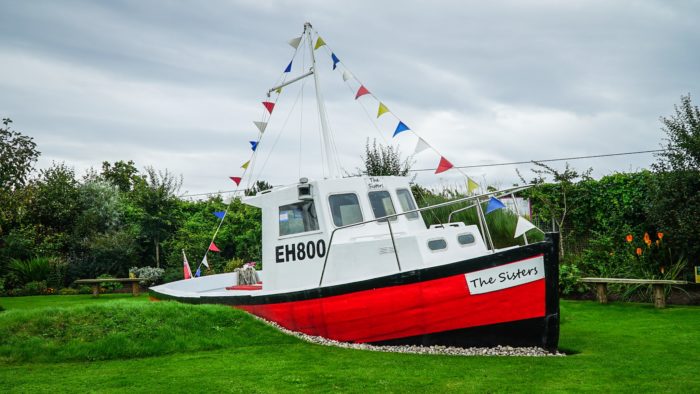 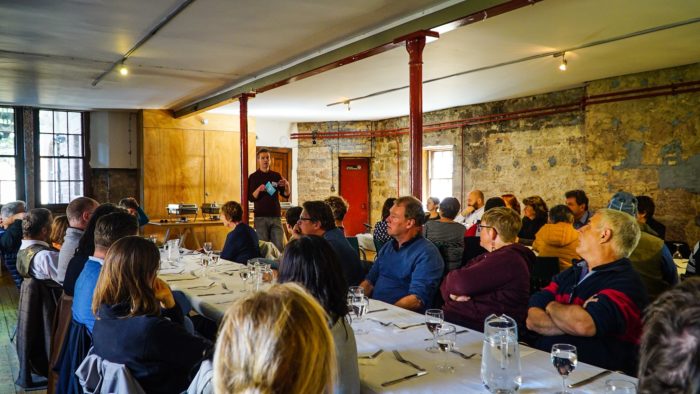 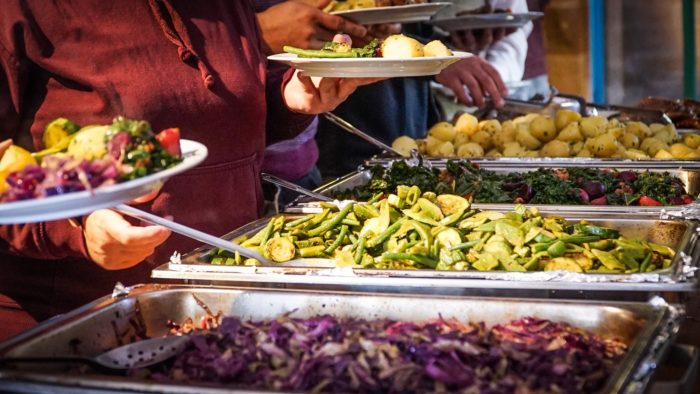 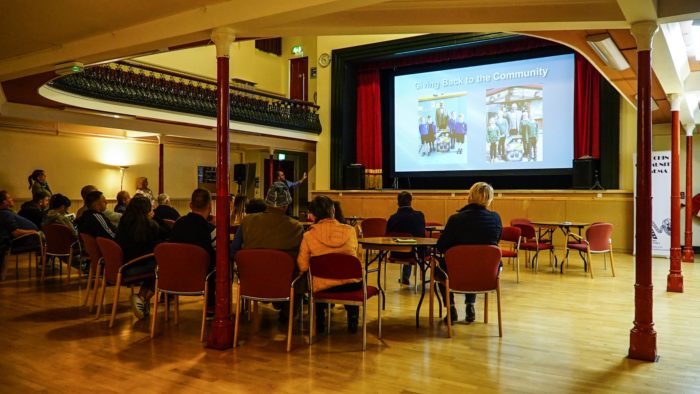 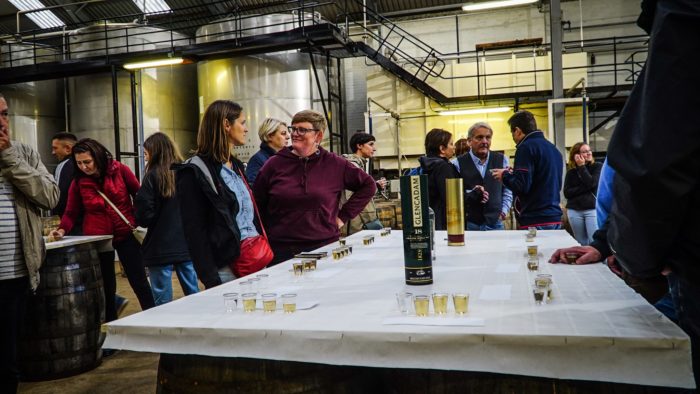 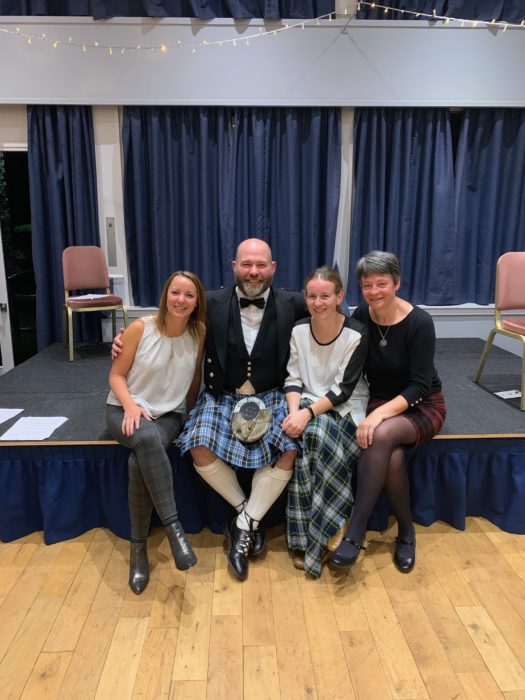 After the tour  the groups split and the majority of the participants went on to Newton Farm tours in Inverarity and Brechin City Hall, whilst the leading group held an organisational meeting.  We all met up once again in Brechin at Glencadam distillery to learn about the distilling process and sample some of the fine whiskies made in Brechin that Scotland is famous for.

It was only fitting that the last night in Scotland would be spent celebrating our own culture and experiencing some of our proud traditions with a ‘Scottish Night’ at the Park Hotel.
Bagpipes, highland dancers and an ‘address to the Haggis’ set us in the mood for the meal that was to follow.
More traditional dancing, this time from all the participants, allowed us all to finish of the trip in style. Each country then made one final effort to share their own culture through song and we were all delighted by the impromptu choirs that arose from Scotland, Romania and Belgium. 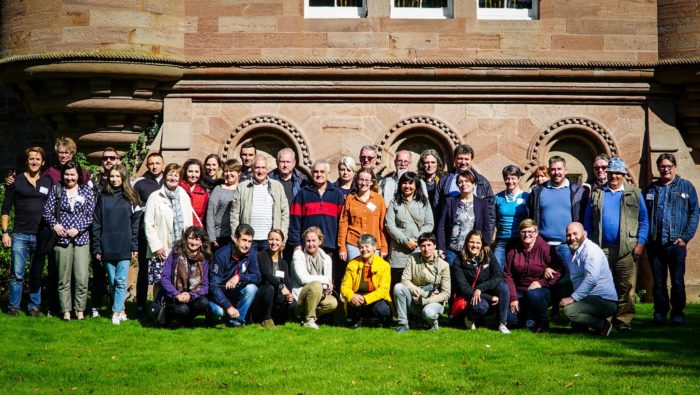 We said our farewells on the night, but the flight schedules on Saturday allowed us to give a wee bit more to our guests and we managed to arrange a bonus visit to the annual Dundee Food and Flower Festival that was being held in Camperdown Park in Dundee. It fit perfectly with the themes associated within the project of craft and rural skills, food and drink and welcoming visitors.

By midday we finally waved goodbye and wished our colleagues from Bazinul Dornelor and Meetjesland a fond farewell.